I have spent the last three days filling out little slips of paper to show interest in teaching jobs at a conference of something like two hundred private schools. The slips of paper have my assigned number above my name, in case a company wants to look up my resume, and about four lines for me to write a comment or question. Mine looked a little something like this: 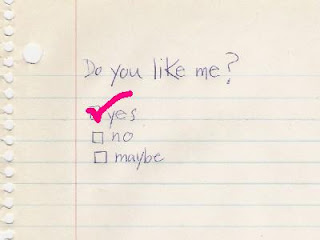 I sat with another hundred-something candidates and we all checked our boxes hourly or bi-hourly (I believe I've just invented this word), waited in the line at Starbucks, or thought about when we'd next eat. It was remarkably pleasant - I don't know that an environment where everyone is dressed in suits makes everyone display his/her best behavior, but it definitely makes everyone speak more quietly. Here is the hope: employment. Maybe even a career. Beyond that, since we're hoping, maybe an enjoyable career. Here is the current reality: fudge-striped cookies for breakfast.
Posted by Kay Arr at 2:37 PM No comments:

What I wouldn't give to be in New York. 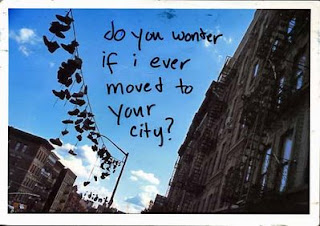 In other news, February is about to end.

At least this month's not too painful, and it doesn't last very long.
Posted by Kay Arr at 9:16 PM No comments:

Oh, the weather outside is frightful.

Discovery of the day: Snapple.com unveils which facts on its caps are true. (The false ones never make it to the website.) My favorites:

Mount Everest rises a few millimeters every year (438). In Monopoly, the properties are named after streets in Atlantic City (669). The Statue of Liberty wears a size 879 sandal (444). You breathe in about 13 pints of air every minute (446).

Lobsters can live up to 50 years (455). Fresh cranberries can be bounced like a rubber ball (455). To remove crayon marks from the walls, use a hairdryer to heat the wax (492). It is against the law to put pretzels in bags in Philadelphia (664).

A chalkboard eraser is one of the best ways to erase a foggy windshield (477). Candles will burn longer and drip less if they are placed in the freezer before burning (478). The pupils in goats’ eyes are rectangular (440).

The motto on the original penny was "Mind Your Own Business" (163).

The cure for February. 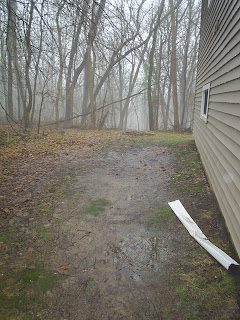 Get a clean start.
Posted by Kay Arr at 6:20 PM No comments: 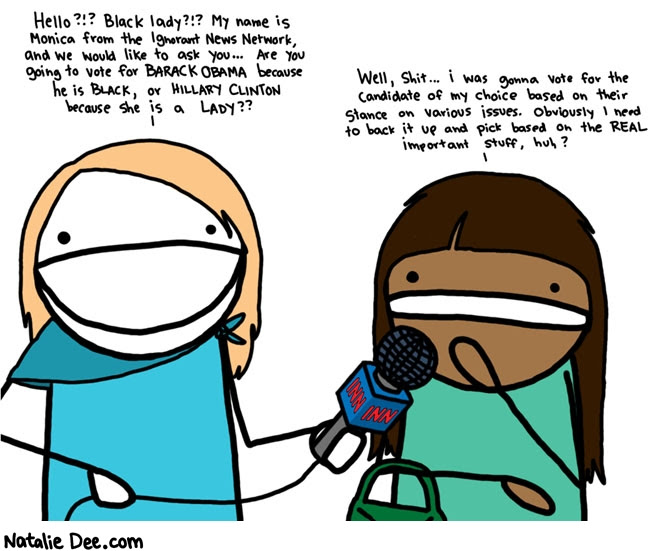 Thank you, Natalie Dee.
Posted by Kay Arr at 9:48 PM No comments: 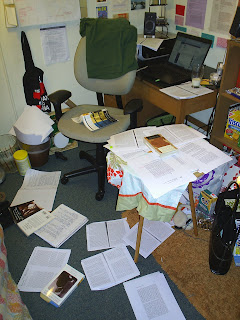 It's definitely the multitasking season. I am having evenings where I officially open four tabs on my web browser, three Word documents relating to my thesis, two Word documents relating to my job applications, one program to download television for a break midway through, and some music program to keep up my energy. One e-mail reminds me of something I wanted to say in my job application, and that reminds me of something I wanted to e-mail a professor, and that reminds me of a website I meant to check, and I haven't got anything new in my inbox so I write some short stories to kill time between e-mails. And I get up for a cup of tea and my roommate reminds me we meant to watch something else, so I come back and download it, and send another two e-mails while I'm waiting.

My desk doesn't look so cluttered as the picture above (taken during an honors paper), but my brain feels like it. This is a generational divide. My mother can't write an e-mail with music on.

Everything seems to feel more complete when I approach it in this manner, but it's a lot for one brain to remember.
Posted by Kay Arr at 10:54 PM 1 comment:

Labels: multitasking, norton anthology, pinky and the brain, the spice girls, too much

"Some things just don't make sense, and that catch is a good example."
- David Tyree

(Thanks, Gene, for the quotation.) Sometimes nonsensical things are so, so right.
Posted by Kay Arr at 7:10 PM No comments:

Not the cruelest month. But close. 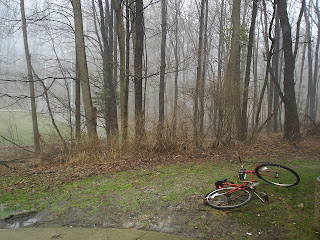 It's February all right. There's virtually no sunlight through the fog. There's mud and ice combined all over the place - double the chance of slipping and ruining the books in your arms. There's no color. No one looks at anyone else when they cross paths - but no one really does cross paths, because everyone's trying to stay inside.

A friend of mine commented at lunch that there was no pleasure in this particular meal; we were just trying to quell the possibility of hunger. So nothing had a particular taste. I put music on as I was walking, not because I felt in the mood for the songs I chose, but because the songs could prevent me from feeling some negative sort of mood.

We're all concentrating on our feet, trying not to slip. I forget how much focus that takes, and how much energy it drains from daily pleasures. There is a profound distinction between human behavior in pleasant weather and foul weather. This weather isn't particularly foul; we had freezing rain storms last night, but it's closer to thirty degrees than three. It's certainly less hateful than January. But it still feels like there's little worth looking forward to, at least for another 23 days.

Autopilot is the worst.
Posted by Kay Arr at 1:08 PM No comments:

So I did sit and eat. 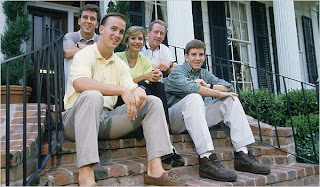 Another meditation inspired by Paradise Lost:

I have a theory "love" is the most abused word in the English language.

"Love" is the same word we use to describe our feelings for favorite foods, good weather, our own children and spouses, the relatives we're obligated to care for, friends we've known for decades or still don't know well, and as a synonym for zero in tennis.

We inscribe it on chalky candy hearts and expect it in pink, cursive letters with kiss marks this month. We read it in Hallmark cards and Shakespeare. This word is so overused, it scarcely has meaning, but it has a reputation for being the most meaningful thing on the planet. It's the subject of nearly every good song. We're told it's what we live for, it's all we need. We're told we should be willing to take risks for it, work hard to keep it, and perhaps even die for it.

Some of us also use it to describe our feelings toward certain sports teams. I certainly include myself in this category. Especially tonight, after such an incredible game.

(I am increasingly conscious of my skewed concept of agency - it seemed as though my actions could potentially affect the game. I rushed through dinner so I wouldn't neglect the boys during kickoff. A friend put a sparkly crown mid-game, and when the Giants began to lose, others told him to take it off. When we yelled at Belichick for heading to the tunnel with one second left, someone said, "He can't hear you anymore!" As though prior to that dramatic exit, he had carefully listened to our helpful commentary.)

It is a very real sensation, is it not? We invest ourselves emotionally in these games just as we invest ourselves in stories. There is a sense of narrative that is reinvented by sports reporters and features writers for every major game. Eli Manning is rewritten from the scrawny little brother to a quiet, upstanding man who leads by example. This character is mostly invented by the press. But we also know very real things about him.

A guy sitting beside me during the game laughed as Peyton Manning cheered his little brother on. "Doesn't he really want him to lose?" he joked. "Don't you think they quarrel over the dinner table? Tomorrow Eli will come to dinner and just set the trophy on the table and start something."

I held my tongue, but I wanted to add that that is completely inconsistent with Eli's character. I knew because I had read an article on his relationship with his mother, which detailed his behavior at the dinner table with his brothers (he was always reserved and not especially competitive). 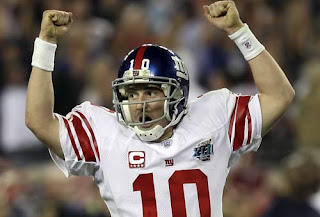 It's disgusting, isn't it? What a twisted world of celebrity. But I certainly don't know as much as most sports fans. Of course there is a real sort of love to it, if only a surreal one. An empathetic love. More of an endorphin rush than a good chick flick or a romance novel, because of the emotional investment over a longer time (and how seriously we take a good football game). But I believe it's the same sort of desire for narrative that leads us to love a novel. We want to be invested. We want to project our emotion into this. We want to watch an underdog triumph over a solid, seemingly infallible force. We feel affirmed when someone defeats the odds, as though what's going on in some stadium in Arizona for a few hours can grant us some sort of hope for our own tedious lives.

Anyway, the direction I wanted to take this was Milton's. God is love, is He not? In the context of the text, at the very least. But God is above all human emotion. He can't experience envy or pride, as much as he seems to when Satan's followers describe him. He has transcended this.

And if humans can also experience love, there is naturally a metaphysical element to our definition of the word, one I never intentionally employ when I talk about my passion for strawberry fruit snacks. (Though I am not John Donne. "You must sit down," says Love, "And taste my meat." / So I did sit and eat.)

And I don't believe my love for the New York Giants - as strong as it may seem - has actually transcended human emotion into God's realm (even if you don't believe in God, in Milton's God's realm). So what is it? And how do we quantify it?

Above all, what draws us to story? Why are we hungry for it? Why will Eli Manning's face sell thousands of papers tomorrow morning? Why do we read our children fairy tales? Why do we still buy books? Why are we on the internet at 1:15 in the morning?

I know this is a common experience. The Super Bowl is a perfect example of shared investment in story and character. Even people who have not followed the Giants since birth were caught up in their victory. The question I have is: why?
Posted by Kay Arr at 2:29 PM No comments: